On 23rd December, Save the NHS campaigners Jenny Shepherd, Christine Hyde and Paul Cooney tried to deliver a letter, signed by over 1,000 members of the public and 83 campaign groups, to the NHS England office in Leeds.

The letter called for the immediate resignation of the Chair and Members of the Board of NHS England. However no one from NHS England was willing to accept the letter.

The campaigners tied the letter to a pillar outside the entrance and later posted a copy to NHS England. They are awaiting a reply.

Scores of people took part in the Howl! of protest outside the NHS England office in Leeds, against contentious NHS Sustainability and Transformation Plan contracts for 2017-19 that will see over £1Billion of Government cuts from West Yorkshire and Harrogate Health & Social Care Services by 2020/21. 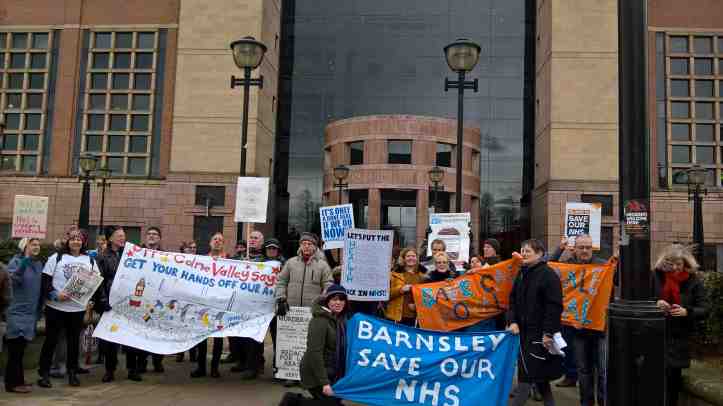 Signed off  on 23rd December, these contracts will deliver huge cuts and changes to NHS and social care services – but both the public and frontline NHS staff are in the dark about where these cuts and changes will fall, such is the secrecy of the 2017-19 STP operational plans.

Hopefully other Yorkshire and Humberside parties will also announce their support for the the campaign to Stop the STPs.

The protest organiser Chrissie Parker asked all West Yorkshire and Harrogate MPs to attend the protest and invited them to speak against the Sustainability and Transformation Plan. None attended and most MPs failed to even reply to the invitation. Those who did reply included a disclaimer that their emails are confidential, so we are unable to report what they said.

The West Yorkshire and Harrogate Sustainability and Transformation Plans, if implemented, aims to cut over £1 billion from NHS and social care budgets by 2020/21, compared to what needs to be spent to maintain current levels of both services.

NHS England – the government’s NHS commissioning quango – and the NHS Trusts’ regulator NHS Improvement aim to achieve this by imposing a harsh financial control total across the whole region and making all the NHS organisations mutually responsible for keeping their spending within this limit.

This is already destabilising both hospital trusts and clinical commissioning groups, which are unable to meet their statutory requirements for patient care while sticking to the financial controls.

The Leeds section of the West Yorkshire & Harrogate Sustainability and Transformation Plan makes the shocking admission that:

“Our services will provide a minimum ‘universal offer’ but will tailor specific provision to the areas that need it most.”

“This is a total departure from the principle of a comprehensive NHS. What happens to patients who need more than the minimum universal offer but aren’t judged to be eligible for any more than the universal minimum?”

Already Calderdale Clinical Commissioning Group is in so-called “financial turnaround” as a result of harsh Sustainability and Transformation Plan financial controls – meaning it faces having a private sector consultancy company parachuted in to tell it what to cut.

The governance systems needed to impose these region-wide financial controls are not even in place and Councils protest that they are not included in the decision making bodies, despite the fact that their social care services – already massively underfunded and facing more cuts through the Sustainability and Transformation Plans – are meant to be integrated with NHS services and rely on the Sustainability and Transformation Plan to transfer significant funding from the NHS.